As we come closer to the end of the year, let’s remember the importance of hope in the lives of our youth. Below is a beautiful story from last winter that shows the wonder of hope and grace. Our young people need support and strong advocates who will not give up on them. That is exactly what our CCYP® team is committed to providing for every youth. 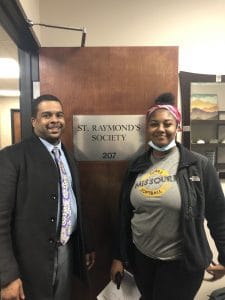 “In December of 2020, Z. was seventeen-years-old, pregnant, and homeless. When she was referred to CCYP®, she was living in a temporary hotel and had nowhere else to go. The CCYP® team worked diligently to find a stable place for Z., but were faced with challenges because many organizations did not have availability or couldn’t help until she was eighteen. Soon, a CCYP® Specialist was able to connect with the Living Hope Church and the leadership graciously decided to allow Z. to live in their Hospitality House until a permanent solution was found. On a cold winter night, Z. called her specialist to let them know she was on her way to the hospital to give birth to her baby. The next morning, Z. had a beautiful baby girl. Less than a month later, Z. turned eighteen, and the CCYP® team breathed a sigh of relief believing the housing problem would be much easier to fix now that Z. was of age. But, as COVID strengthened its grip on many mid-Missouri communities, CCYP® had to ask for two stay extensions for Z. from the Living Hope Church because there were little to no options available. Organizations either weren’t accepting new clients or had long waiting lists. Utilizing and gathering community resources, the CCYP® team found an organization named St. Raymond’s Society. This organization has homes where women who are struggling can live and grow. After many phone calls with the director and two interviews, Z. was accepted to live in one of the Columbia houses. This was such exciting news because St. Raymond’s is not only a place for Z. to live, but also a place where she will grow into an independent mom. The program will help Z. focus on finishing school before she pursues employment. Whatever Z. hopes to accomplish, St. Raymond’s, and the CCYP® program will help her reach those goals.”